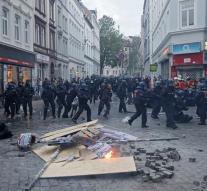 hamburg - With the riots in Hamburg, 196 police men have been injured so far. According to the corps in the North German city, no one is seriously injured. It is not clear how many demonstrators have suffered injury.

According to the Hamburg fire brigade, the activists have their own emergency workers who take care of the wards so that the local authorities do not have a look at numbers.

The G20 meets Friday and Saturday in Hamburg. On Thursday, the first riots broke out and anti-G20 activists fought with the police.