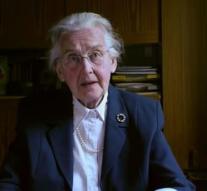 detmold - A 87-year-old woman from the German village Vlotho has been sentenced to eight months' imprisonment for her denial of the Holocaust. The woman, Ursula Haverbeck had in February in a letter to Mayor Rainer Heller Detmold denied the crimes committed in the Nazi concentration camp Auschwitz. It was a labor camp, she said.

Haverbeck is widow of a Nazi official. The judge in Detmold was inappropriate to impose her a suspended sentence. Haverbeck was made by repeating even more colorful during her trial that it considers the Nazis did not systematically persecuted Jews. The denial of the Shoah or Holocaust, as the prosecution is called by the Nazis, is- as in the Netherlands- a criminal offense in the Federal Republic.