Home / World / Navalni is allowed to travel from Russia 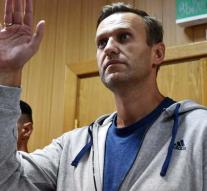 moscow - Kremlin critic Aleksei Navalni is allowed to travel to Russia. He stated that on the internet on Wednesday. The dissident was stopped at Moscow airport on Tuesday when he wanted to get on the plane. He was on his way to Strasbourg to attend the ruling of the European Court of Human Rights in his case.

As a reason to stop him, the authorities stated that Navalni had scammed a company. The opposition leader distributed a picture on Wednesday showing him at the passport control.

The European Court will decide on Thursday whether the times that Navalni was thrown into prison in Russia were politically motivated.