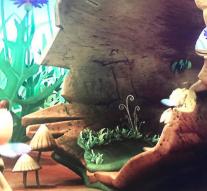 - A watchful mother has spotted something in the Maya series that you would not expect in a children's series. On a tree trunk is clearly a male genital part to be seen.

On Facebook, she warns other parents and shows them a screenshot. 'This is Maya the Bee season one, episode 35. I paused so you can see I'm not lying. '

In the episode Maya clogs into a tree trunk. In the background, the remarkable image can be seen. 'This does not belong in a children's show, I find it disgusting. There should be no reason why my children should see something like that, 'says mother Chey Robinson.

Her message makes some sense: the post has been shared almost 13,000 times; more than three thousand people have responded. While some parents indicate never to put the series on, others find it hilarious. 'What child does it look right now? They look at the bee, not to the almost invisible penis, 'it says. 'Probably they think it's a mushroom. '

The series is available on Netflix in the United States.