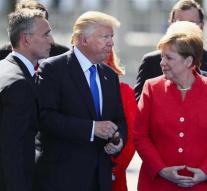 brussels - The leaders of the 28 NATO countries have agreed on an action plan against terrorism on Thursday at their Brussels summit. An important part of this is to intensify the battle against IS.

The military alliance becomes a member of the US-led coalition against the terrorist movement, a step that is seen as a relief to President Donald Trump. However, a fight for NATO is not discussed.

NATO's AWACS radar aircraft will carry out more flights to map the current situation in Syria and Iraq. The more than sixty countries of the coalition can use this for example in bombing.

A new information exchange information department is also being set up, which also aims at Syria fighters. A coordinator still to be appointed must keep an overview of all activities against terrorism.

The leaders also gave green light for a plan to divide the cost of collective security more honestly. Each Member State spending less than 2 percent of GDP on defense should report annually on how it plans to raise spending to this level, as agreed in 2014.

The United States President Donald Trump had shortly approved the 23 NATO countries that do not now meet the norm. He demanded that the 'chronic defaulters' pay their fair share and fulfill their promises.