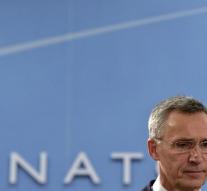 brussels - NATO sends reinforcements to Turkey to help the country to defend the border with Syria. The ambassadors of the member states which decided Friday.


There go planes and ships to Ankara says NATO chief Jens Stoltenberg. Although he did not say it in so many words, the reinforcements are also partly intended to avoid more Russian fighter jets are shot down, as happened last month.
Not far from Turkey into Syria fighting is fierce. Furthermore, several countries carry out bombings in an attempt to restrain terrorist movement IS.
NEW