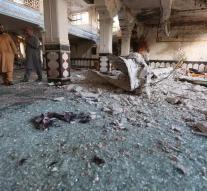 cabul - A Georgian soldier and two Afghan civilians have been killed Thursday night by a suicide attack on a convoy of the coalition forces in Kabul, reported the NATO coalition Friday. Wednesday were already two American NATO troops in Kandahar killed by a suicide bomber targeted the Taliban.

At the Thursday night attack, five NATO soldiers were injured, three Georgians and two Americans. Among the wounded are also an Afghan interpreter and seven citizens. They are treated at the American hospital on the Bagram air base. Their situation is stable.

The NATO coalition has about 13,000 soldiers from 39 countries. They are on mission in Afghanistan to train and help local soldiers. Although Georgia is not a member of NATO, the country is helping with 870 men in Afghanistan.