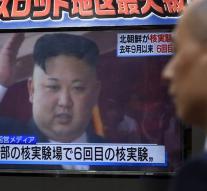 The Noor said Sunday in an interview with the BBC that the military convention of the West is not a direct party in the conflict. After a subterranean nuclear test, NATO has called a week ago North Korea to stop its rocket and nuclear trials.

A reaction from the rest of the world to the regime of dictator Kim Jong-un certainly includes NATO, according to Stoltenberg. However, he did not want to say whether NATO could intervene if North Korea were actually targeting its aggression against the island of Guam, formal American territory. The NATO treaty stipulates that an attack on one member as an attack applies to all members.

NATO has 29 member states, including the United States and many European countries.