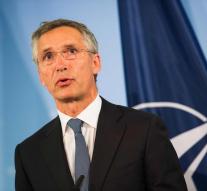 brussels - Jens Stoltenberg, Secretary-General of NATO, will Thursday and Friday a visit to Turkey. Since the failed coup in mid-July in Turkey does not have a High Representative of the military alliance NATO country visited.

Stoltenberg meets next Minister Recep Tayyip Erdogan, among others, Prime Minister Binali Yildirim, Minister of Foreign Affairs Mevlut Ҫavusoglu and Defense Minister Fikri Işık. What will the discussions, NATO reported Tuesday, but it is obvious that will include the conflict in Syria passes by.

Immediately after the coup condemned NATO this sharp and expressed support for the democratic institutions of Turkey. More than three weeks ago, the Alliance released a statement to the outside after a reconciliation meeting between Erdogan and Russian President Vladimir Putin. NATO said the rapprochement not see any reason to withdraw the membership of Turkey in doubt.