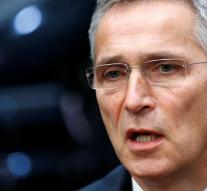 brussels - Also among Donald Trump, the United States will fulfill their obligation under the NATO treaty to come to the aid allies. NATO chief Jens Stoltenberg said Tuesday in Brussels to discuss the next US president.

Trump threatened during the election campaign to withhold support for European countries that spend little on defense and called NATO even unnecessary. President Barack Obama said Monday that the US remain strong and robust NATO partner under his successor.

Stoltenberg reiterated that defense budgets in Canada and Europe are on the rise again and said there ' absolutely certain 'to be that NATO remains the foundation of the transatlantic defense. ' A strong NATO is important for Europe but also for the US 'The Norwegian former prime minister Trump is a big fan ' '' of the military alliance.

The Secretary-General further said it is normal to find that Trump talks with world leaders such as Russian President Vladimir Putin. They spoke on Monday to work together constructively. Stoltenberg will again soon convene the NATO-Russia Council since the dialogue is important according to him tensions with the ' assertive '' Russians keep going. In this regard, he said that NATO will never accept Russia's attack on the territorial integrity of Ukraine.

Stoltenberg Tuesday attends a meeting of European defense ministers in which closer cooperation between the EU and the military alliance is on the agenda.