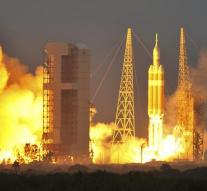 - NASA gives green light for the launch of a US space probe toward an asteroid, in order to learn more about the origins of the earth and perhaps our entire solar system.

An Atlas 5 rocket to be launched Thursday from Cape Canaveral aboard the robot researcher Osiris-Rex. This is a seven-year mission directed towards the 500-meter wide asteroid named Bennu, which takes in about the same orbit around the sun and the earth.

The asteroid is heated by the sun and it is the task of Osiris-Rex to map the path of Bennu. NASA hopes the mission also to learn more about photography and mapping of the area, in order to improve future technologies.


Scientists estimate that there is a chance of 1 in 800 over 166 years Bennu touches the earth.