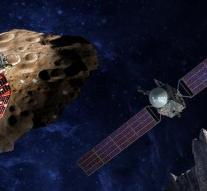 houston - How did our solar system originated about 4.5 billion years ago? Since the US space agency NASA is going to do new research. In 2021 and 2023 two probes are launched for.

NASA announced the two missions Wednesday. Lucy goes between 2027 and 2033 doing research on asteroids near the planet Jupiter. These rocks date from the early days of the solar system and since then hardly changed.

The second probe is the Psyche, who goes to another asteroid. There he should arrive around 2030. The destination is special because the asteroid is not composed of rock and ice, but of iron and nickel. Probably it is the core of a failed planet. Who would ever have been as big as Mars, but the outside would be wiped out after a series of heavy bombardment. As a result, the exposed core remained. The asteroid is between Mars and Jupiter.