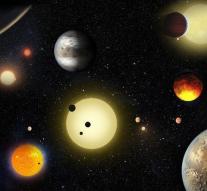 houston - The United States built the coldest place in the universe. A 'super freeze' the temperature should drop to one billionth of a degree above absolute zero, the coldest possible temperature. That is 273.15 degrees below zero, or 0 Kelvin. Then stop all molecules moving.

The device is almost ready. In August he went to the International Space Station, has announced the NASA Tuesday.

The experiment is important for the investigation of phases of substances. The most famous phases are solid, liquid and gaseous. At extremely low temperatures results in a different phase, the Bose-Einstein condensate, but scientists have not yet fully what happens. But they know that atoms then no friction feel more, they become superfluid. 'When you have such water and it spins into a glass, it would always continue to run. There is no stickiness, in order to slow it down and to dissipate the energy. If we understand, we can use it for efficient energy '', says NASA.

On earth have done experiments with the Bose-Einstein condensate, but those atoms remain only be a fraction too short to really look good. In the space scanners have more time, possibly minutes in the future.