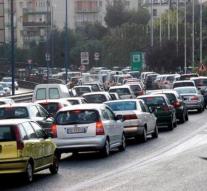 naples - The municipality of Naples has decided, following other major Italian cities which suffer from smog, limiting car traffic considerably. The ban applies in Naples from 2 to January 8 at certain times of the day. On 3 and 6 January, the restrictions are less stringent.


Such restrictions on car traffic have already been promulgated in Rome and Milan. In the fight against air pollution, it is in many places prohibited fireworks to stabbing. Italian media reported Thursday that nearly one thousand municipalities in the country have banned fireworks.
In Naples should also put the heating layer in public buildings and factories.
NEW