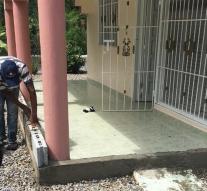 Hurricane Irma shifts his shadow: the estimated dozens of Dutchmen living in the Dominican Republic need to quickly find a safe accommodation. The violent storm that caused a trace of destruction on, among other things, Saint Maarten, landed there within a few days.

Naomi Luyben lives in Las Terrenas in the province of Samana and works there as a receptionist. Together with her mother and brother, they are ready to leave for Jarabacoa, leaving them no longer at sea.

A family in the Netherlands wants to get there as soon as possible. 'We're leaving because my grandparents and father want this. From here we can not hear anything. Only that we have to put everything in order to timber up. '

Naomi sounds anxious on the phone. 'It's fine now, but I'm going to get upset. '

The situation is still unreal: it is still shining again and in nothing it seems that the emergency weather is on arrival.