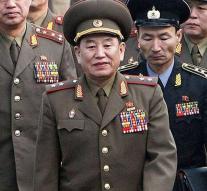 seoul - North Korea sends a heavy delegation to the closing ceremony of the Winter Games in South Korean Pyeongchang. The delegation is led by a senior official who is jointly responsible for sinking a South Korean naval vessel in 2010, killing 46 people on board.

It is Kim Yong-chol, now the second man in the Communist Party, who is in charge in the North of the present on matters that concern both Koreas. He was in the past the head of the military organization that according to Seoul has the sinking of the ship Cheonan on her conscience.

The visit of the North Koreans coincides with that of Ivanka Trump, daughter and adviser to the American president. This leads the American delegation attending the closure.