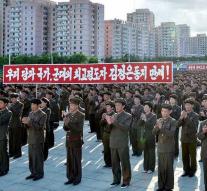 pyongyang - North Korea is pushing the pressure by announcing that 3.5 million workers, party members and soldiers have reported as volunteers to serve in the army.

That states the state newspaper Rodong Sinmun today. 'All our citizens are ready to take revenge against the US, and that many thousands of times,' the newspaper said. 'On August 9, only 89,000 young men reported themselves in one province. '

Trump said earlier this week he was ready for military intervention.

Last Wednesday, the regime also organized a demonstration in Pyongyang against America.