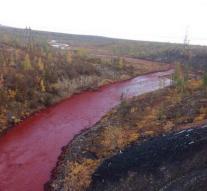 - "Norilsk Nickel, the world's largest nickel producer, has admitted being responsible for the deep red color of the Russian Daldykan River."

"By heavy rains earlier this month flooded one of the dams of the plant, causing polluted water ended up in the river. That leaves the nickel producer said in a statement. Fingers being directly though to the nearby nickel factory, which make initially denied something weird discoloration have."

"The Russian town of Norilsk is known for its high level of environmental pollution."