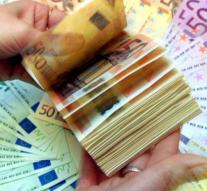 - The Austrian police are trying to find out how more than 100,000 euros has entered the Danube. The floating notes of 100 and 500 euros were last weekend in an arm of the river.

The first study shows that the money can not be linked to criminal activities in the vicinity of the area.

According to Austrian media, he now wants to claim a share of the money. " The boy said he wanted to bring the money to the police, but the question is whether the police has found the money or the boy ", said the police spokesman.

In Austria, anyone who finds cash and the police will be entitled to a portion if the owner is not found within one year.