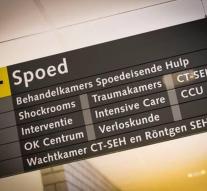 niekkerke - A mysterious disease is dominated by a potato-processing company in West-Vlaamse Nieuwkerke. About one hundred employees suffer from headache, sweating, coughing and fever without clearing what is the cause. The Health and Safety Agency confirms the inexplicable disease wave at Clarebout Potatoes.

In any case, it is not about flu and legionella, according to the agency. According to reports in the French press, dozens of workers were hospitalized. 'It's about short-term recordings,' says a spokeswoman for the agency against Het Nieuwsblad Thursday. 'Most people get there after two or three days on top. 'At the company, a thousand people work, 80 percent come from France.

'We have taken samples everywhere, including the water. But we also have blood and urine samples taken from employees. The results are not known yet, 'said the spokeswoman. The company has tightened the hygiene rules. So everyone has to wear a mouthpiece.