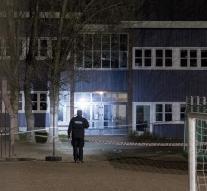 - Norwegian police are investigating a mysterious stabbing that claimed the lives of two people. A 14-year-old boy and a 48-year-old woman was seriously injured Monday afternoon found on the street for a school in Kristiansand. She died later in hospital from their injuries.

The police do not know what was the reason for the massacre and could find no witnesses to the incident. According to Norwegian media revealed that the two had nothing to do with each other. The woman worked at a day care center elsewhere in the city. The boy was not at the school where he was found in.