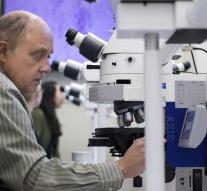 monrovia - Four of the victims of a recently emerged mysterious disease in Liberia have been tested positively for a form of meningitis, such as meningitis, said the health minister on Monday.

So far, 31 cases of the disease have been reported, which struck scientists with stupidity. Thirteen of the sick died during the outbreak that was associated with attending a funeral of a religious leader.

Although the symptoms differ from ebola, sudden deaths still caused fear of a new outbreak of tropical disease. 'Based on the first results of the CDC Atlanta (US Center for Disease Control), we believe we are faced with a likely outbreak of meningitis in Sinoe, which spread to the provinces of Montserrado and Grand Bass,' said Bernice Dahn.

She said the government is investigating options for mass vaccinations against the disease.