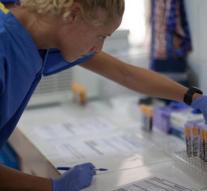 geneva - Nine people died and eight became ill after visiting Liberia in a funeral of a religious leader. That said the World Health Organization (WHO) on Friday. Other sources speak of eleven dead.

A spokesperson for the WHO said that the first research results of the Liberian authorities exclude ebola as a cause of death. She could not tell if the samples were sent to other laboratories for confirmation.

The Liberian health authorities took early emergency measures when suddenly eight people died of a mysterious disease, ten months after the end of an ebony virus outbreak. The samples are still being investigated for other bacteria and whether there was common exposure to contaminated water or food, the spokeswoman said.

The eight sick people stay under observation in a hospital at four hours drive from the capital Monrovia. They have fever, diarrhea and vomiting. Most patients are under 21 years old.