Home / World / Myanmar: we do not negotiate 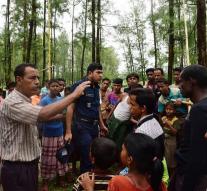 naypyidaw - Myanmar has declared the ceasefire that the Rohingya rebels have promulgated beside themselves. 'We do not negotiate with terrorists.' Rohingya insurgents in Myanmar have declared a ceasefire of a month to enter Sunday. The strike-fire must allow emergency workers to help victims of the conflict in northwestern Myanmar.

At the end of August, Rohingya insurgents attacked dozens of police stations and army base in the state of Rakhine. The subsequent collisions and a military counteroffensive caused a true exodus. Nearly 300,000 Rohingya have fled to neighboring Bangladesh.