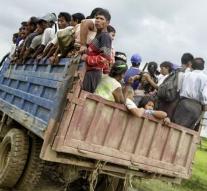 yangon - The Myanmar forces have started their own investigation into the behavior of soldiers in the state of Rakhine. More than half a million Rohingya flew in front of a violent outbreak.

The army was attacked after Rohingya insurgents attacked security forces at the end of August. Witnesses declared that soldiers were guilty of assassinations, rapes and burns.

A military committee is now considering whether the men adhered to the code of conduct and followed their orders, according to a statement on the Facebook page of army leader Min Aung Hlaing. 'Then they release all information. '