Home / World / Myanmar is trying to protect all citizens 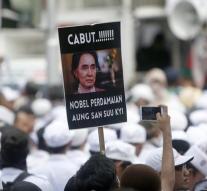 naypyidaw - The authorities in Myanmar are trying to protect everyone in the Rakhine conflict region. That said the Myanmar leader Aung San Suu Kyi, who did not talk about the massive exodus of Rohingya Muslims from that area.

Since the latest outbreak of violence on August 25, an estimated 164,000 Rohingya has fled to neighboring Bangladesh. It came Suu Kyi, who has been awarded the Nobel Peace Prize, to face many international criticisms.

The Myanmar leader stressed Thursday in an interview that 'we are doing our best to ensure that everyone is entitled to protection by law. 'She also said that' our resources are not as complete and adequate as we would like. '

Rohingya claims to have fled for the authorities in their home country. Refugees told Reuters press agency that they were forcefully expelled from their village Kha Maung Seik. 'The army brought Buddhists from Rakhine. They set fire to our village, 'said a 55-year-old man.

'All Muslims in our village, about 10,000, have fled. Some were shot dead. The rest came here. There is no one left there, 'said the refugee.