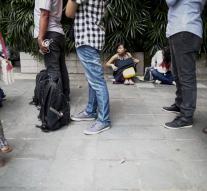 naypyidaw - The Government of Myanmar has eight of the twenty rebel groups in the country signed an armistice . The first step towards lasting peace in our country, President Thein Sein called the agreement Thursday .

Many rebels have been fighting for over 60 years against the military government. Larger groups, such as among others reside in the state of Kachin, have not signed the agreement. All groups that have done so have been met by the government's list of terrorist organizations.

In Myanmar for decades ruled by a military dictatorship, which several years ago organized the political situation gradually relaxed and in elections. In 2011 the military government was formally abolished and installed a new parliament.

In November, there are presidential elections.