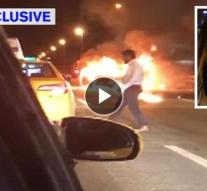 new york - The 23-year-old New Yorker who has been arrested for leaving his girlfriend behind in a burning car after an accident is not a coward but a hero. That says Saeed Ahmed's brother in the New York Post.

'My brother has made every effort to get his girlfriend Harleen (25) out of the car, but it did not work. The flames were too heavy, 'says Saeed's younger brother Waheed Ahmed (21). According to him, Saeed could not reach emergency services because his phone was still in the burning Infiniti G35.