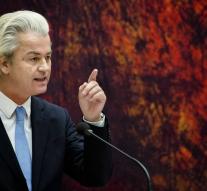 - PVV leader Geert Wilders wants to go to refugee centers locked until completely clear who are in it. He said that on Friday morning in the WNL television program Good Morning Netherlands in reaction to the arrest of a Syrian terrorist suspect who was staying at a refugee boat in Zaandam. He would have been there to refugees as a warrior of al Qaeda and IS.

Wilders Netherlands has not yet learned of the attacks in Paris and is the control remains " a big Swiss cheese." " We just do not know who is coming into our country. We must close hermetically refugee centers, until we know who are in it. "