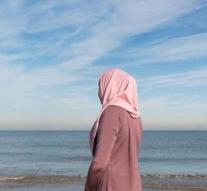 vienna - Muslims in Europe have increasingly been discriminated against over the past decade. Dutch Muslims more often experience discrimination than the European average. This is evidenced by an investigation by more than 10,000 Muslims in fifteen different EU countries by the European Union Agency for Fundamental Rights (FRA).

Of the respondents, 17 per cent have been discriminated against in the last five years. In a previous study of the FRA from 2008, 10 percent of European Muslims said they were discriminated against on religious grounds. The percentage in the Netherlands is higher. Of the Muslims in the Netherlands, 30 percent say that they are even disadvantaged because of their religious beliefs.

The respondents were asked for discrimination in situations in four areas: as jobseekers, at work, in search of a home and in their contacts with educational authorities. Of the jobseekers, 31 percent say they have been discriminated against in the last five years. The survey is held between October 2015 and July 2016.