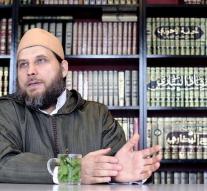 the hague - A large number of Islamic organizations are fierce at Minister Blok (Security and Justice), which has imposed an area ban on the controversial Syrian preacher Fawaz Jneid.

Jneid is 'oppressed and robbed of his freedom', proposes various Islamic organizations, including the Islamic Education Foundation. In a joint statement, they speak of 'a witch hunt on anyone who has a different opinion than the average public opinion'.

Minister Blok said last week that the preacher, sentenced for the conclusion of illegal sharia marriages, may not be in the Hague districts of the Transvaal and Schilderswijk in the next six months. He arrived, alongside the initiative of The Hague mayor Krikke, after the Telegraph had revealed that Jneid and his Qanitoen Foundation had an illegal mosque in a bookstore on the border of Transvaal and Schilderswijk.

A large number of Islamic foundations now find that Jneid is murdered and deprived of his freedom and rights. 'We regret therefore to note that there is censorship and a selective anti-Islamic rule that affects not only Imam Fawaz, but also the Dutch Muslim. Therefore, we will no longer be tacitly watching how our religion is being demerished, 'the organizations said in their statement.

The radical Sheikh, on request, asked yesterday to appeal against the imposed area ban. 'I feel supported by a large number of mosques and imams who are worried. Their great fear is that they will be in turn. '