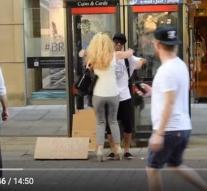 manchester - A young Muslim has hugged people in the center of the city after the attack in Manchester. Dozens of bypassers went to Manchester Blarash News to comment on blogger Baktash Noorder, according to local newspaper.

After the attack, Noori drew the city to hug as many people as possible. He made a blindfold and took place next to a sign entitled 'I'm a Muslim and I trust you. Do you trust me enough for an embroidery? 'Video footage shows how people of all ages and descent hit their arms around the man.

The blogger spent several days in the city center and filmed the experience. He told the newspaper that he was initially bloodnerveus, but that hit after he had received the first hug. Many passers-by responded to the action emotionally.

According to the young Muslim, the action was intended to bring together the communities in the city. He wanted to show that Muslims were shocked by the attack.