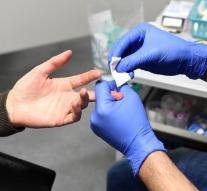 leusden - Doctors and patient associations have difficulty displaying Muslims with diabetes from the ramadan or, at any rate, to adjust their medication. Although they have been warning for the effects of fasting for years, the Ramadan still leads to additional hospitalizations. The Islamic fasting period begins this weekend.

'During Ramadan, everything changes for patients,' says Olof King, director of the Diabetes Association of the Netherlands. 'The time of getting up, the meal times and the meals themselves are different. This gives rise to risks if drug use remains the same, as spraying is linked to food. If you inject without eating, you get a heavy hypo. 'The professional organization for pharmacists KNMP finds that many patients randomly skip their day-to-day dose or take all medicines at a time. This leads to insufficient effect or side effects.

The Amsterdam Slotervaart Hospital gave a special brochure for chronically ill Muslims. It emphasizes that the Quran gives them an exemption because of their disease to overcome the fasting. 'Ask advice to Imam if you find it hard to make a decision about it yourself,' says the hospital. But one of the problems is that many Muslims are difficult to reach, says King. 'This means that patients often make themselves less busy than their neighbors. They are not discussing the discussion. So we must also see their surroundings, but that is difficult. '

The KNMP points to the possibility of making drug patches or replacing drugs with alternatives that are less frequent. Sugar sickness is more common among immigrants than among the Dutch, for example, in Turks and Moroccans, four to six times as much. According to figures from the Dutch Diabetes Federation, 70,000 Muslims with diabetes in our country still participate in the Ramadan.