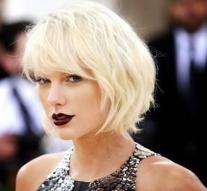 - Taylor Swift's complete oeuvre is available again on Friday on the major online music platforms. That made the singer's management known on Twitter on Twitter.

In 2014, Taylor removed her music from streaming services like Spotify, which she called 'an experiment.' In an interview with Rolling Stone, she explained, 'I'm not willing to service my life work from an experiment that I do not know whether it will fairly compensate the writers, producers, artists and music makers. I just do not agree With the idea that music has no value and therefore is free. '

In 2015, the singer decided to allow her album 1989 on Apple Music, after promising to pay better payers and songwriters.

In the announcement of Thursday, Taylor announced that her music is available to celebrate that 1989 has gone over ten million times and sold over 100 million singles in total. It is not known whether it is a temporary or permanent return of her music.