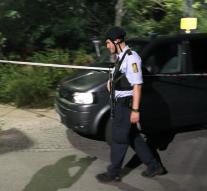 ronne - A man in the Danish Ronne is Wednesday night shot dead by the police because he had attacked with a knife. Agents wanted to seize the man's music system because a neighbor had complained about noise. That lap of the 48-year-old Dane down the wrong way.

He lit one of the officers several times with a knife, according to the Danish Local. This, the police decided to shoot the man.

In the hospital, the man died. The agent was treated for his injuries.