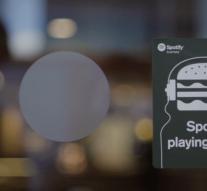 - Was first played more music in the United States through music streaming services than through websites like YouTube and Vevo. That the BBC reports. Music services like Apple and Spotify accounted for 114 billion streams in the first six months of the year. The video platforms continued stabbing at 95 billion.

Drivers of music streaming services were mainly the song Rihanna Work. The most listened album was Views of Drake, which was turned on in April over one and a half billion times. Also Adele (25) and Beyoncé (Lemonade) scored well.

While streaming music becomes more popular, the CD sales decline by 11 percent and sales of digital albums with 17 percent. On the other hand, the sale of vinyl grows by 17 percent.