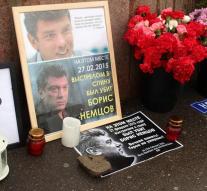 moscow - The five men who were convicted last week of the assassination of Russian opposition leader Boris Nemtsov in 2015 will hear what punishment they receive on Tuesday. For the man who unleashed the fatal shot at Nemtsov, threatens a life sentence.

Chechen ex-military Zaur Dadajev was appointed by the court as the shooter. Four companions of Dadajev, who know all complicity, can get a maximum 25-year celestial sentence.

The Nemtsov family is convinced that the five are not the actual perpetrators, but only the real brain behind the attack, the Chechen leader Ramzan Kadyrov. That's what Dadajev called 'a true Russian patriot. ''

The daughter of Nemtsov, journalist Sjanna Nemtsova, said in a statement that 'the attack on this case has not been resolved'. She pleaded that the investigation into the murder attack continues. The lawyer of Nemtsova also believes that Kadyrov should have been heard. That has always denied the Russian authorities.

A Russian government spokesman said earlier that it is a 'very complex matter', which may take years to identify the brain after the murder.