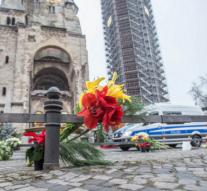 berlin - Berlin woke up this morning with the same sound that last night ushered in the tragedy. On the Breit Schatz Platz sounded roar of a heavy duty diesel engine. This time not only whooping like him last night just after must consider sounded when the driver coming from the direction station Bahnhof Zoo plowed into the Christmas market, but sonorous hum. Hear the sound this time at the men who have taken the murder weapon from the scene of the disaster: the rescuers.

All night did the police further investigation into the attack. This morning his agents massively present too. The most heavily armed and with tight faces. Bit by bit they get the ribbons off that last night the Christmas market is sealed off. Thus visible what destructive track drew the assassin. Stalls are higgledy-piggledy. The brightly colored tarpaulins that form their roofs, hanging crooked down. The combination trailer stands there as if he were right out of the air come fall. The tractor itself is the tragedy in one image. Through the shattered windscreen extends around a Christmas tree with the lights still there.

Along the Budapester Strasse, near the crash site, the first flowers are laid and lit candles. In an annex of the Kaiser Wilhelm Memorial Church are the first people already in the early morning. They hug each other, cry and prepare for the memorial ceremony to be held later today.