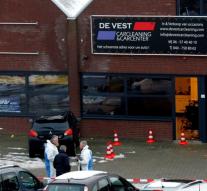 - Two men suspected of having slain on New Year's Eve 2014 Mahmut Karaman in his car cleaning business in Valkenswaard, stand today in court. Justice is in Amsterdam Seref C. (50) the shooter.

C. came during last year's image as a suspect and was arrested in his cell. He was then already on suspicion of the murder of a Turkish couple in Slotermeer in November 2013. About the motive to be more evident during the substantive session today.

Karaman was shot dead as he tinkered with a car. The shot would be from outside the garage, cross are unloaded through a window. On shell casings police found DNA similar to the DNA of C. During the Investigation police dropped a controversial undercover action.