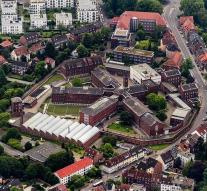 - The prison Münster, one of the oldest in Germany, must be evacuated as quickly as possible. The building is threatened in such a bad condition that collapse. In total there are 515 detainees seater. They must be transferred by Friday to a more secure cell.

The wealthy real estate company of the Land of North Rhine-Westphalia terminated the lease with Justice Wednesday with immediate effect.,, According to the latest report, the construction of the building so unreliable that spontaneously topple or collapse is highly probable, '' a spokesman said.

The Muenster state prison in the city center and was built 160 years ago. Although the state of the rickety walls and roof for months is monitored with sensors, the order came to evacuate for Justice as a complete surprise. However, problems will not worry, said Minister Marcus Strunk.,, We have plenty of alternatives available to us. ' He cited as examples the prisons of Coesfeld, Krefeld and Mönchengladbach as fallback options.