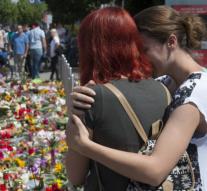 - Police in Munich on Sunday called on media to stay away from schools that were victims of the massacre on Friday. Police Chief Hubert Andrä points out in a message to the survivors, classmates and teachers Monday a very tough day if left blank in certain classes chairs.

,, As a mark of respect, solidarity and support for our children, I ask to see you on interviews and recordings in our schools. ''

Last Friday, shot a mentally disturbed student from Munich nine people dead in a shopping center in the northwest of the Bavarian capital. Three killed came victims were fourteen, fifteen two, three others 17,19 and 20 and one victim was 45 years old. Ten people were seriously injured Sunday of whom are still three in critical condition.