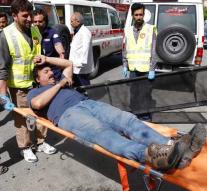 kabul - At least seven people were killed by two attacks in the Afghan capital Kabul, twenty others were injured. In the eastern province of Nangarhar an attack was committed on police officers.

According to a spokesperson for the police, a suicide bomber on a motorcycle would have caused the first explosion in Kabul. The victims are citizens. The attack took place in the Shash Darak district near the secret service headquarters, the US embassy and NATO headquarters.

A short time later, a second bomb exploded in the same neighborhood, when emergency workers took care of the wounded of the first attack. Among the victims of the second attack would be journalists.

In the province of Nangarhar a policeman was killed by an attack. Five others were injured.