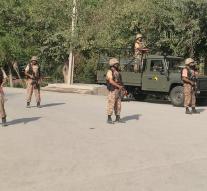 peshawar - A multiple suicide attack on a Christian settlement in northwest Pakistan Friday least one guard killed. The four perpetrators were killed, reports the Pakistani army. A faction of the Pakistani Taliban says the hand to have had in the attack.

The attackers, who wore bomvesten, opened early morning fire on security forces near Warsak Dam. There was a firefight in which two attackers died. The other two blew themselves up.

In the attack were two soldiers, a policeman and two guards wounded. The settlement has been scoured, but more perpetrators are not found, the Express Tribune reported.


Another Pakistani newspaper, Pakistan Today, reports on the authority of a source in the security forces that killed victim was a resident of the settlement. Made possible the guards are part of the Christian community.

The attack is the work of Jamaat-ur-Ahrar, the Taliban faction announced later in the day. A spokesman spoke of,, multiple deaths', but left open whether he meant perpetrators or victims.