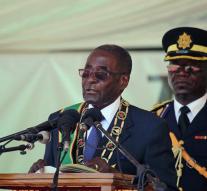 harare - President Robert Mugabe of Zimbabwe can no longer count on the full support of the veterans in his country. The association of former combatants has expressed in a public letter given that the increasing dictatorial attitude of the president and his henchmen no longer acceptable.

The values ​​of the liberation struggle of the past are being wiped out, let the veterans. She competed in the sixties and seventies side by side with Mugabe against the regime of the country then known as Rhodesia. The veterans have their leader of 36 years that he is now in power, backed by thick and thin. In April 1980, Mugabe stepped down as prime minister.

The BBC reports that also displays the current military top signs of resistance to the president. Mugabe's power relies heavily on the military. The succession of the 92-year-old president is now openly quarreling in his own party. Mugabe, however, has recently announced they will participate again in 2018 to want to fulfill the presidential elections and that post until his death.