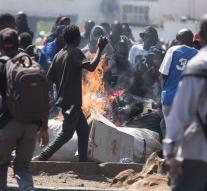 harare - Zimbabwean President Robert Mugabe has lashed out at judges who gave permission for runaway demonstrations against the government. The 92-year-old leader warned the magistrates according to the BBC that they are not have to get into their heads negligent in making such decisions.

The criticism of the aged president fell ill with the opposition, which accuses Mugabe of intimidation of the judiciary. Opposition supporters steps Monday to the Supreme Court to contest a two soaking lasting demonstration ban.

The popularity of Mugabe is under pressure from the economic crisis in Zimbabwe. Demonstrations against the government ran repeatedly on violence in recent weeks. Mugabe protesters earlier warned that they do not have to hope for an 'Arab Spring' in the country.