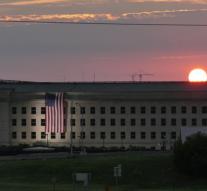 - Who by president-elect Donald Trump is appointed to the crucial post of Minister of Defense of the United States is increasingly the subject of speculation. In the US press, more and more names of candidates for the Pentagon.

The Wall Street Journal quoted sources who are sure Marine General James Mattis out of service (66) it is. Other media mention, among others, General out of service David Petraeus (64), the man who also was director of the CIA. The latter position, he had to resign in 2012 after a year because of an extramarital affair.