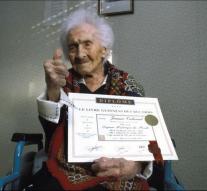 london - The oldest recorded human life was 122 years. The probability that this record is broken, it is relatively small. Much more is at present not because scientists see this as the natural limit.

In the leading British scientific journal Nature is the report of a treasure hunt in the Human Mortality Database, storing data about life and death. The research was conducted by staff of the Albert Einstein College of Medicine in New York.

In the last century lap Human life expectancy unprecedented speed up. This led to the assumption that humans could still be quite aging through proper nutrition and medical care. But this trend has clearly slowed since the eighties. After the hundredth year of the life expectancy is rapidly off, the researchers report.

The Frenchwoman Jeanne Calment died in 1997 after a life that had lasted 122 years and five months. The chance that someone surpasses, is extremely small. Per man chances are approximately 1 in 10. 000.