Home / World / Much damage after earthquakes in Italy 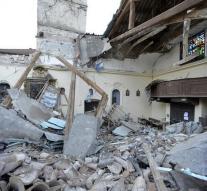 rome - The earthquakes which have hit much damage Wednesday central Italy. A number of people were injured, but only a few were taken to hospital. No one came, according to the Department of Civil Protection.

In total, there were three serious quakes place in power ranging from 4.9 to 6.1. Italy is particularly relieved that, unlike the deadly quake earlier this year, no one was killed. A quake in the same area in August took nearly three hundred people died.

In Visso, one of the bigger places that were affected, mainly buildings collapsed which were already damaged in August, the mayor said. 'It's a bad condition and you can clearly see the damage, but I can happily report that it is better than it looks. We have no casualties, nobody was seriously injured and one is missing, 'said Giuliano Pazzaglini.

The government has allocated 40 million euros directly to alleviate the consequences of the earthquake. Prime Minister Matteo Renzi spent Thursday visiting the affected area. 'The entire population is behind you,' he told local administrators and officials in Camerino.

Renzi insisted that make the buildings earthquake resistant is crucial. The prime minister wants to government spending to strengthen schools are not counted by Brussels as part of the European budget rules.