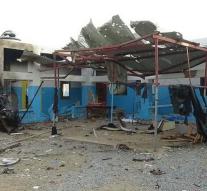 sanaa - MSF withdraws from northern Yemen. Following the air strike on Monday in a hospital of the aid organization in the northern Yemeni Abs, which nineteen people were killed.

The aid agency late Thursday managed to evacuate staff from hospitals in the regions of Hajjah and Saada.

MSF calls the assurances that the bombing was a mistake,, unreliable '. The air raid was carried out by the coalition put forward by Saudi Arabia in Yemen who fights against the Shiite Houthi rebels.