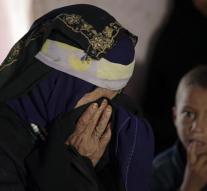 - An air raid on a hospital MSF in northern Yemen Abs Monday claimed at least seven lives. Thirteen people were injured, notify local residents and local officials. MSF does not have to be able to see how many victims there are cases.

The air raid was carried out by Saudi Arabia and some Sunni allies, which the Yemeni government are shot to help in its fight against the Shiite Houthi rebels. Saturday, ten children were killed in a bombing at a school in the neighboring province of Sadaa. Sunni alliance maintains that a training of the rebels was the target of the air strike.